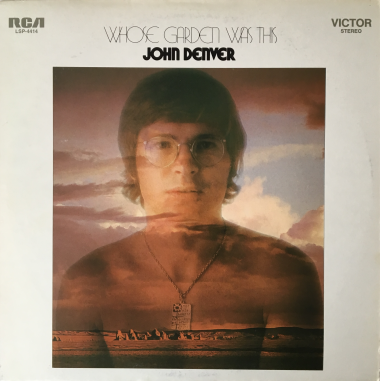 Unless you have a thing for MOR country pop there’s not much need to have any John Denver on your record shelves. With the emphasis on the word ‘much’. Because there is a smidgen of need, in the shape of the megastars third LP for RCA, 1970’s Whose Garden Was This.

The album consists mainly of cover songs and is fully deserving of the weak reviews and poor sales it received. But it has to be said, the surprisingly jaunty and very danceable cover of Eleanor Rigby is well worth the buck or less it will cost you to snag from the dollar bin.

Special mention also has to be given to the track I Wish I Could Have Been There (Woodstock) which does feature some pretty decent fuzz guitar noodlings. But more than that you have to appreciate the honesty of a rather square singer-songwriter admitting he wished he could have been at the hippest event of the year. Mr Denver’s soul is bared in the same way his chest is bared on the cover: a little too awkwardly for him ever to be considered ‘cool’.