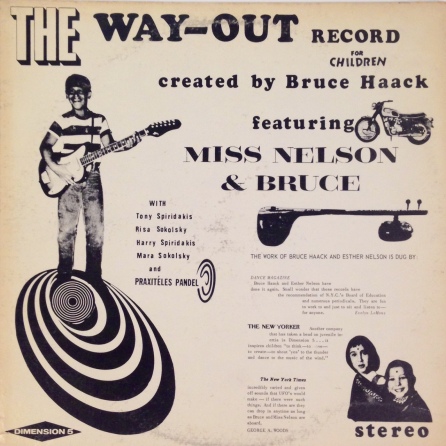 To start this thing off I decided to think about my top score. I thought about it on the bus. I wasn’t thinking about musical excellence or highest book price but simply the record that warmed my cockles the most. Probably music that isn’t available on CD and that I was unaware of before finding it. An artist that hasn’t been featured in Record Collector, Shindig or Mojo. A record that even the most avid anorak wouldn’t ordinarily come across in a month of Sundays. Unless of course, like me, you happened to be in exactly the right place at exactly the right time on exactly the right Sunday.

After much deliberation, and almost missing my stop, I narrowed it down to two records. Strangely both were recorded in 1968 but that’s about all they have in common. I’ll have to write about the winner tomorrow, after I’ve checked the spelling, but the runner up is: The Way Out Record For Children by Bruce Haack (Dimension 5, 1968).

OK, so Bruce Haack has almost certainly been mentioned in the savvier music magazines at some point, probably when the compilations ‘Hush Little Robot’ and ‘Listen, Compute, Rock, Home’ got released in the late 90s. Both are astounding collections of the seminal electronic innocence Mr. Haack recorded for children many moons ago – using home made synthesizers no less. As with most cult figures, there’s a ton of excellent information about him easily found on the World Wide Web (including free mp3s and even a documentary). But original pressings of his self-released LPs are anything but easy to find. Indeed I recently saw a copy of The Way Out Record For Kids for sale with a price tag of $200. Imagine my delight.

The demand for his records has no doubt been increased by the interest generated from the aforementioned comps. Now pretty hard to find themselves, they do include a few songs off Way Out Record – most notably the blissfully sublime contortions of School For Robots – but their omission of Nothing To Do as sung by nine year old Tony Spiradakis makes the original LP a delightful catch. Barely a minute long, it’s a garage-psych-for-kids anthem that concludes the album with the same bitter-end vibe that closes the first two Doors records, but thankfully minus all the hairy pretension. The final lyric, drowned in reverb and delay, says it all as it echoes into the spin out: ‘The record’s over, it’s all over, and there’s nothing to do…’